Robby, has your time arrived? 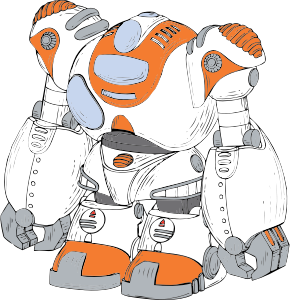 I reacted with nervous laughter a couple of days ago when I read a story about South Korea conducting an experiment with using robots as prison guards. While I chuckled at the image of robots wheeling around the prison yard monitoring the inmates, I wondered if they would have names like, Agent Smith or Robby. Yes, I know Agent Smith was not really a robot, but I’m trying to make a point.

As a longtime science fiction fan I’m familiar with numerous robots both good and bad. As a child I was fascinated by Robby from The Forbidden Planet. In the early days of science fiction robots were often depicted in suspect ways. While Robby, and others of his race, appeared to be benevolent (see Asimov’s 3 Laws of Robotics), it only took one bad human, or a simple electrical short, to turn a robot into a psychotic serial killer. One moment robots are saving the world (see C3PO and R2D2), the next moment they’re overthrowing it and eliminating the human race (see Daleks). Yes I know Daleks are really cyborgs like the Borg; again I’m making a point. What is my point then?

My point is that, as humans, we have a natural tendency to apply human attributes to things that are non-human. This is easy to understand when looking at other biological creatures. What I find fascinating is how we do this with inorganic technology. I do it all the time. I have close, personal relationships with my car, my laptop, my Xoom , my smartphone, even the software our company develops. I get angry at my car when it doesn’t behave the way I think it should. My laptop can be temperamental. I can talk to my phone and it answers back, often in unexpected ways.

Sometimes I develop such a deep relationship with technology that I feel a sense of loss when it goes away. It took me a while, but I became very comfortable with Windows XP. I’ve been using Windows 7 for almost as long now but I don’t feel nearly the same level of attachment or intimacy as I did with XP.

Back to the robot prison guards – Will the inmates develop relationships with the robots? Will they be able to tell one robot from the other? Will some robots be friendlier than other ones? What if one of the inmates is a computer genius (this is South Korea after all), would he be able to reprogram the robots to aid in an escape? If robots can guard a prison, couldn’t they take your order at McDonalds? For that matter, couldn’t they prepare your Big Mac? Soon humans will be nothing more than couch potatoes with robots doing all our heavy lifting (see Wall-E).

But of course most of what I’m going on about is science fiction, or is it? Are we moving into an age where the line between organic and inorganic is becoming blurred? We know the Internet has radically transformed many aspects of our lives. How we conduct business, how we find community, how we learn, have all been transformed by the Internet.

The good news is that we, the humans, are still in control. Or are we?