Punching Goliath in the face 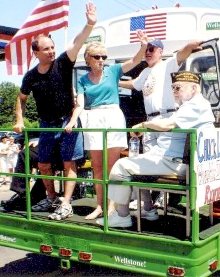 My memories of world-changing events have a cinematic quality to them, I can play them back and examine them almost frame by frame. I remember Sister Loretto’s voice broadcasting the news from the speaker in my first-grade classroom that President Kennedy had been shot, and that all students must kneel beside our desks and pray for him. Two days later our next door neighbor barged into our house frantically saying she had just seen Lee Harvey Oswald gunned down on live TV. I remember driving to work on 9/11 and hearing the surprise in NPR host Bob Edwards’ voice when an eye witness insisted it was a commercial-sized plane, not a small craft, that had flown into the tower.

Nine years ago this week, Paul Wellstone was killed, with his wife Sheila, his daughter Marcia and five others.

I’d rushed from the snack shop back to the deli, having bought a newspaper to peruse over lunch. Chris was digging in, and my sandwich was waiting. “Bad news,” I said, putting the folded newspaper on the table. Chris looked up, then reached for the paper to see the headlines. “It’s not in there,” I said. I’d heard it on the radio, listening with the cashier in the snack shop. Three newsmen were repeating everything they knew so far: a small plane carrying Senator Paul Wellstone was more than an hour late arriving at the Eveleth airport, and the north woods were being searched for a possible crash site. No explanation for the missing plane, other than a crash, was being seriously discussed. Chris and I had a few quiet bites of lunch and hurried back to the office to hear the rest of the story unfold. Less than two weeks before the election, the incumbent and leading candidate was dead, and we were all in shock.

The Wellstone for Senate campaign, one of our biggest customers at the time, was on the verge of success, having pulled ahead of Republican Norm Coleman in the polls after Wellstone’s courageous and prescient vote against the US invasion of Iraq. He was about to become the Bush administration’s worst nightmare: proof that an outspoken liberal could win elections even in a post-9/11 world. After his death, and riding a wave of manufactured indignation over comments made at his memorial service, Coleman narrowly beat Walter Mondale, Wellstone’s last-minute replacement, and the dark days of the Bush administration rolled on.

From the ashes of Wellstone for Senate rose Wellstone Action! (whom we are honored to work with), their mission to train progressives in winning political campaigns; and the Sheila Wellstone Institute, to carry on her work for human rights and the prevention of domestic violence.

It always sounds presumptuous to say something like “X would have done Y if they were still alive.” But I can’t help thinking that Paul would support the Occupy Wall Street movement, in words and in person, today. A veteran of many protests himself, he decried in fiery speeches the policies that promote inequality and worsen the plight of the 99% –he famously said “I’m for the little fellers, not the Rockefellers”– and these conditions have only gotten worse since his death, as illustrated in these charts.

I only once met the man. It was a small meeting in the mid-1980s; I was serving on the board of the Minnesota Jobs With Peace Campaign with its founder Mel Duncan, and Mel’s friend Paul was thinking of running for the U.S. Senate. I was wowed by Paul’s warmth, easy laugh and his friendly intensity. But that intensity was on a whole different level when he spoke in public: not only would he jab his finger in the air to make a point, but if you were sufficiently close, and not directly in front of the lectern, you could see his whole body jump off the floor in the same moment. Not just making a point, but punching Goliath in the face.

No doubt he would be a persistent thorn in the side of the right wing billionaires and their paid minions today. It’s tempting to think that we wouldn’t be in such a mess if he were still with us. But one thorn isn’t enough anyway, even a giant Wellstone-sized thorn.

We all can be, and should be, thorns for a better world.